Although ADHD starts in childhood, it can remain with you until adulthood as well. Some symptoms that you might notice are lack of focus, hyperactivity and impulsiveness. Reaching Resolution offer ADHD treatments for you, so talk to us today. For more information, call our team of medical professionals or book an appointment online. We are conveniently located at 9719 Northeast Parkway, Suite 100 Matthews NC 28105.

What is Attention Deficit Hyperactivity Disorder (ADHD)?
What kind of therapy is best for ADHD?
Does ADHD worsen with age?
When is it time to get help?

There is still much need for research, as neuroscientists do not entirely understand the cause of the disorder. What has become evidentfrom recent research is that two neurotransmitters, dopamine, and norepinephrine, are seen at lower levels in those with ADHD. These chemicals are vital to function effectively and efficiently in the brain’s neural pathways. In many areas of the brain, these two neurotransmitters facilitate attention, organization, executive functions, mood regulation, and more.

Executive functions, a set of cognitive abilities needed for behavior control, are especially difficult for those with ADHD. These processes include organization of information, initiation of tasks, working memory, impulse control, flexible thinking and situational adaptation, emotional control, planning and prioritization, and self-monitoring.

This disorder has also been referred to as Attention Deficit Disorder (ADD), though this term was revised in the late 1980s and is now outdated. Generally, ADD was diagnosed when a person experienced symptoms related to inattention and not Hyperactivity; however, it is now known that all patients with ADHD experience some degree of Hyperactivity, even if it is not the pronounced symptom set.

During revision, the diagnosis of ADHD was separated into three types based on symptomatic experience: inattention predominant, Hyperactivity predominant, and combined type. This disorder is one of the most common diagnoses in childhood, as symptoms are often most apparent during this time.

Adults with ADHD would have had the disorder their entire lives, as it cannot be developed in later years. It is worth noting that women are more likely to be diagnosed in adulthood as evaluation has been tailored towards presentation in young boys, such as restlessness and troublemaking, and are there for underdiagnosed as a group. For the same reason, boys are commonly misdiagnosed with ADHD at a young age.

What kind of therapy is best for ADHD?

The most effective form of therapy for ADHD patients is proven to be cognitive-behavioral therapy (CBT). This therapy works by acknowledging poor behaviors and identifying the thought patterns that lead to such behavior. From there, patients work with a therapist to understand these thought patterns and change them, ultimately improving the behavior.

Does ADHD worsen with age?

The symptoms of ADHD seem to be at their peak during childhood and become more manageable over time. That said, symptoms of attention-deficit Hyperactivity Disorder will persist throughout adulthood and can become more problematic. During childhood, there are not many responsibilities to be disrupted by symptoms.

In adulthood, numerous responsibilities have the opportunity to be impacted by the disorder. Suppose you have monthly bills that need to be paid, such as rent, insurance, etc. ADHD may make it challenging to pay said bills on time as memory is impaired, and you may forget to do so. Another example is when an adult needs to do their laundry regularly, though they may not have the skills to initiate such a task that is unmotivating and doesn’t bring about a satisfactory reward.

Also, they may not have the time management skills to plan and execute home chores outside their work schedule or social time. Many patients with Attention Deficit Hyperactivity Disorder find that having children of their own will provoke worsened symptoms. Not only are there more responsibilities and tasks for a parent than a childless person, but your emotional capacity is also frequently strained.

Those with ADHD tend to feel emotions more robust than the average person, have more difficulty regulating and understanding such emotions, and have impulsive reactions. For these reasons, new parents may find their ADHD symptoms provoked and exaggerated.

When is it time to get help?

With any health concern affecting the brain and nervous system, including mental health conditions, it is recommended that you seek help when your symptoms interfere with daily activities, like hygiene maintenance and food intake, as well as responsibilities, such as education or employment. However, you do not need to be experiencing moderate or severe symptoms to seek help. Everyone who participates in ADHD can benefit from medical help, including therapy or medication.

If you believe you have ADHD or received a previous diagnosis and would like medical support, please do not hesitate to reach out to us at Reaching Resolution. We offer several treatments for ADHD, including prescription medication and various forms of therapy.

Additionally, you can find support for other mental health conditions with our expert counselors. To book an appointment, give us a call or schedule online; we look forward to hearing from you and getting your life back on track. Call our team of medical professionals or book an appointment online. We are conveniently located at 9719 Northeast Parkway, Suite 100 Matthews NC 28105. We serve clients from Matthews NC, Charlotte NC, Mint Hill NC, Indian Trail NC, Pineville NC, and Stallings NC. 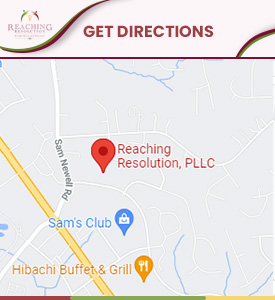